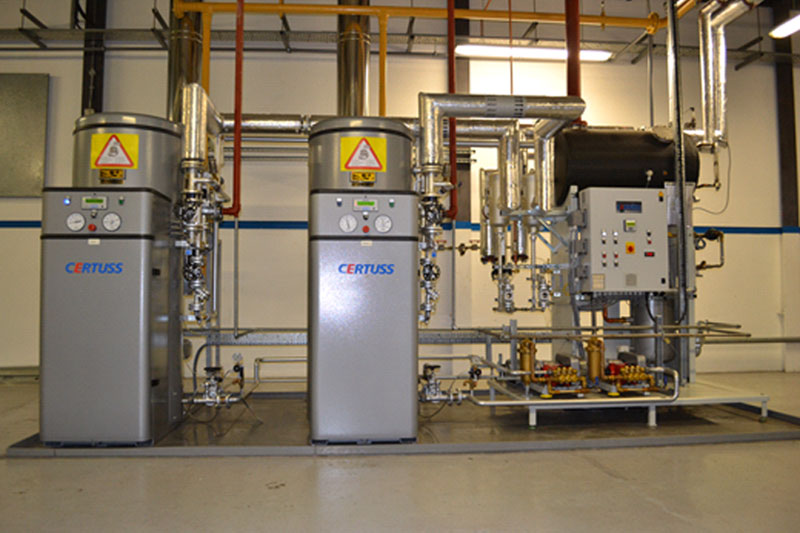 NXP Semiconductors ensure secure connections for a smarter world. They specialize in high performance mixed signal electronics and have operations in more than 25 countries.

CERTUSS UK first made contact with NXP (formerly Phillips semi conductors) in September 2007, where we were invited to the site by the Facilities Engineers to introduce our product to them. The NXP engineers explained that they used steam to control the air handling facility on the site and although they already had existing steam raising plant, they assured that they would contact us if the need for new plant arose.
In April 2009 NXP facilities Engineer Mr. Alf Moores contacted the CERTUSS office to invite us to tender for the supply of CERTUSS Steam Generators to replace the existing plant serving the AHU’s.
A meeting was arranged between NXP Facilities Engineer – Mr. Alf Moores, Services Facilities Manager – Mr. Mike Dawson and CERTUSS Engineers, to establish the site requirements.

A proposal was forwarded by CERTUSS for the supply of 2 x CERTUSS Junior 500 Gas fired units complete with a Package Plant Module operating on a fully Automatic system with PM5 facility for unmanned boiler house operation and connection to the site Building Management System.
The tender submission was accepted where a purchase order for the supply of goods was placed. The installation of the equipment and the site services was carried out by A.M.S Limited of Cheshire, who had also previously installed a CERTUSS containerized package module at Withington Hospital Manchester.
The system was commissioned November 2009 and since then NXP have continued their relationship with CERTUSS UK by installing two further CERTUSS TC 1000 Model Gas fired Generators and Package Plant Module within their facility. The new equipment was commissioned in December 2014.