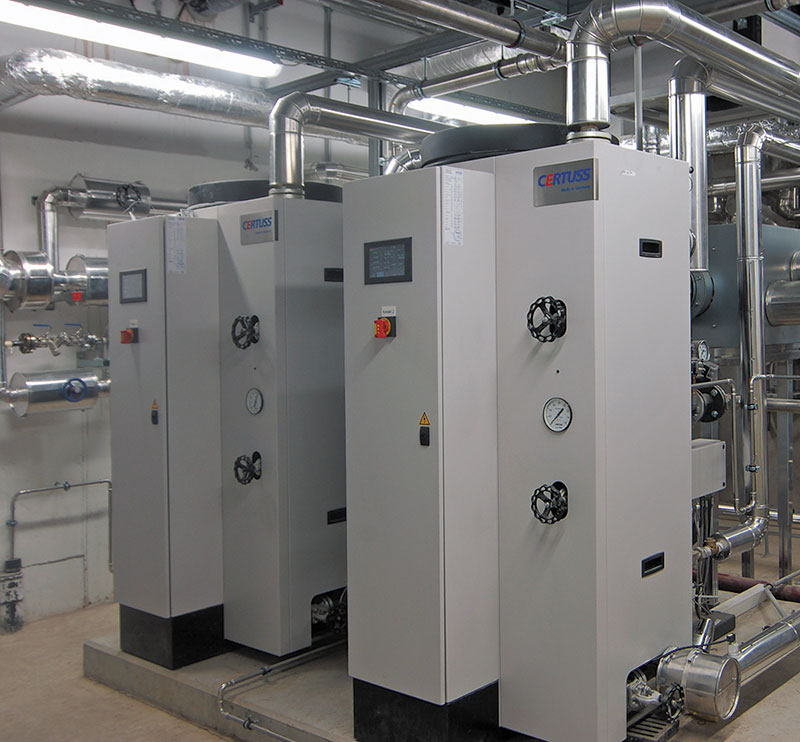 After 5 years of construction, the Hospital in Krefeld has been finished in 2014.
It now ranks among the most modern hospitals in Germany. Home of maximal care with more than 1000 beds the Hospital in Krefeld is an outstanding medical center. In 23 hospitals and 4 institutes, more than 2000 employees yearly take care of over 100.000 patients (both inpatients and outpatients).
A total of 15 CERTUSS Steam Generators have been installed for customers in Berlin, Erfurt, Herzberg, Schwerin, Borna, Hildesheim and Krefeld.

The energy concept for steam generation in the Krefeld hospital encompassed an increase in efficiency and the replacement of two water room boiler that were over dimensioned after the number of steam consumers had been reduced. In choosing the new system the focus lay on efficiency, environmental protection, safety, and user friendliness.

The center piece of the renewal is formed by the energy-saving and efficient steam generation through three CERTUSS Steam Generators of the Universal TC 600 series with the CVE supply unit. Thanks to the use of the water-tube boiler principle, the CERTUSS technology offers a maximum in safety and availability of high-quality steam. The CERTUSS gas burners with modulating output control, the innovative air preheating and the use of two stage burner technology ensure unbeatable advantages in speed and efficiency. Clean combustion air sucked in from above counteracts the trapped heat from the combustion chamber and the air circulation makes insulation material superfluous. Thanks to the resulting combustion air preheating, a combustion-specific degree of efficiency that is unusually high for steam generators is achieved. The system is supplied as a complete boiler house installation, with complete piping, with electrical sub-distributor, feed water tank, mixing heat exchanger, steam dryer, desalination cooler and all the accessories required for the steam system. Thanks to its compact design, it was possible to integrate the complete system into the existing building so that a separate boiler room was not required.